Buying an iron is not the most exciting thing in the world unless you are an owner of a dry cleaning business. However, you will find that it is something that every average person should have in their home, even if they only use it once a year. This is when people should know more about why they need to consider the Panasonic cordless Iron instead of the other ones that are on the market. By reading the best Panasonic cordless iron reviews, you will save much money and time on picking the ideal type for your needs.

What Is the Best Panasonic Cordless Steam Iron?

The Top 3 Panasonic Cordless Iron Reviews You Can Not Miss

First on the list is the 360 Freestyle from Panasonic. Perhaps the most obvious strength of this iron is the fact that it is cordless. If you’ve never used a cordless iron before, then you are in for a real treat. You can move the iron around more freely and get the job done in a fraction of the time. You aren’t wasting time stopping to move the cord, to step over the cord, or to plug it back in because you accidentally pulled it out of the wall.

Losing the cord isn’t the only way this iron helps speed up your work. It also features a powerful double-tip design to help you finish twice as fast. With the double-tip and the missing cord, you can quickly move the iron back and forth to deliver that crisp look without any interference. It can iron in any direction so that there is never any wasted movements.

It also has a fairly modular design. First, there is the charging base where you leave the iron to rest and charge. Once it has been sitting here for ten minutes it will automatically turn itself off. There is also a detachable 4-ounce water tank. You can take the tank to the sink and fill it up without sticking the entire iron under the sink. Just another way the 360 Freestyle makes ironing easier.

The charging base has the appliance’s only cord and it can be retracted back into the base with the touch of a button. If you’re finished and the iron isn’t charging, then you can tuck the whole set away very nicely in a small space. It is less than a foot in length and half a foot in width. You can buy it less than $140, more details below:

Panasonic knew they were on to something with the 360 Freestyle, so they took the concept, refined it some, and released the NI-WL600. It has all of the best features of the 360 model with a few additional improvements. For starters, it is, of course, cordless. By now, it’s safe to assume that all of the best irons in the world will be made cordless.

This iron is a little more compact than the original 360. It’s lost just a few inches in length, yet gained a couple in width. A really interesting improvement is the introduction of the curved stainless-steel soleplate. It is still double-tipped, but the new curved design makes it even easier to iron back and forth in either direction.

The NI-WL600 also has some other new features worth mentioning. There is an anti-calcium system used to keep the steam vents free of sedimentary build-up. Something that has plagued many steam irons in the past. And the anti-drip system uses a water seal to prevent any water from spotting on your fabrics.

There are also plenty of easy-to-use controls. For example, the electronic temperature control lets you easily choose the desired temperature for the iron. There is also an adjustable steam control that lets you choose exactly how much steam you need for the job. Never too much or too little. And, of course, you always have the option of dry ironing without the steam. It’s all at the push of a button. One final safety feature is the auto shut-off feature, which remembers to turn off your iron when you forget.

The final iron on the list is the NI-L70SR from Panasonic. Once again, it is a completely cordless iron, which means you’re getting the job done faster without worrying about the cord. The soleplate has experienced some improvements as well. There are round indentations that trap pockets of air, which allow the soleplate to move even smoother than before. It still has a bit of a curve to help with that as well.

Some of the same preventative measures are in place from the previous model. There is the anti-calcium feature that prevents build up in the steam vents and the anti-drip system to stop water from ruining your fabrics.

The water tank is detachable with only the push of a button. This makes it easier to fill up with water while you are ironing. No need in carrying a hot iron over to the sink and trying to fill it with water. That’s a bit dangerous. Now, you can simply detach the tank, go fill it up, and then re-attach it with ease.

There is also a vertical steam option. You can direct the burst of steam in a vertical direction to help steam curtains or garments that are hanging. It’s a neat feature that saves a bit of time.

Panasonic is known for creating a lot of great products, but perhaps their irons are at the top of the list. They have pioneered the art of creating cordless, sophisticated irons with double tips and curved soleplates. Many of their features are designed to make the ironing process quicker and more efficient. They also introduce plenty of safety features to keep you from burning the house down or burning your clothes.

Panasonic Is A Good Brand

Often when people are shopping for iron they do not think about the brand of the iron they are going to buy. However, this often means people will end up buying the est brand on the market and end up disappointed when the brand fails them. The reason they end up disappointed is it only seems to fail them when they are needing to use the. With the Panasonic brand, it is one that people are going to recognize as being a good quality brand that will last them for a long period of time without wearing out.

People may not iron because they are constantly getting caught up in the cord. When this happens it tends to make ironing quite a bit more dangerous than what people think. This is when people should know this is an iron that is cordless and it will make it easier for people to avoid tripping over the cord and keep themselves safe. This, in turn, will make it easier for people to get the right ironing done without having to worry about tripping over the cord and getting them tangled up in the cord.

Charging Base Has Retractable Cord

This is going to be another factor that people are going to enjoy with the cords. As it was mentioned the iron itself is already going to be cordless. Since this is cordless it will make it easier for people to avoid tripping over the cord. However, when people have the battery charging on the base, they will find this is going to have a rechargeable base that has a cord that can be retracted as well, which reduces the trip hazard for people when the iron is in the base charging.

This is a great feature that people are going to like as well. Normally people would not think about an iron causing them any type of problems, but hand and arm fatigue is a real issue that people have to deal with. With this iron, it is going to be designed in an ergonomic way that is going to be easy for people to get the handle and hold onto it. So you will be able to easily iron and not have to worry about your arm or hand getting tired. Then you can finally complete the ironing job that you have at hand and know after you are done that your hand will be completely ready for you to go out and continue to go on with your day.

This is a great feature that you will enjoy because you may have to put your iron up before it is completely cooled off. When you have to do this, you will find the carrying case that is present here is going to be heat resistant. So you do not have to be concerned about the carrying case giving you any problems when you are going out, but also not have to worry about burning your hand when you are moving the iron from the ironing board to the place where it is normally going to be stored at.

This is something that is fairly standard now, but some irons still are not using these features. That includes the anti-drip feature that will help keep your clothes free from any of the extra water that could end up dripping out of the iron. However, it will also include an automatic shut off in case you are really in a hurry and forget that you have left the iron on.

Choosing the right iron from the above options is no easy task. Each iron is similar to the next in many ways, but with some slight improvements over the last. In most cases, it will simply be a matter of budgeting. Each of the irons looks great and works equally well. 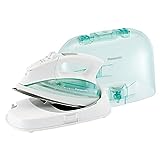 More about the special function irons you want to buy, you can see our collections:

Please note that as an Amazon Associate we earn from qualifying purchases.  Learn more.

For Quilting and Sewing    Pressure